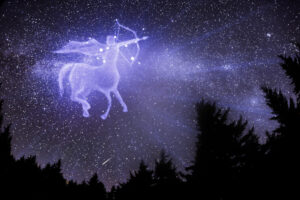 We are the one earth,
and we have traveled very far.
We yearned when we looked out upon the arrow
That points to the marrow of the galaxy.
Oh, how we longed to stretch the bow and let it fly!
Let it carry us in its wake,
Like a ship that splits the ocean,
Let us ride its waves.

But the paths were veiled to us.
In darkness they lay empty and unused.
We knew they were there.
They were as close as our breath!
It was not space we could not span.
Our lack of knowledge was the expanse we could not cross.

Little did we know that we were locked inside ourselves;
Our very nature kept us bound.
So, we dove into our deepest core to find the answer.
Then we understood.
We unlocked a code.
We harnessed a hidden force.
We pulled the bowstring with a boundless strength,
And rode the arrow to the stars.

In a torrent we were swept along.
In an avalanche we were thrown.
Motionless, we moved!
The walls of distance tumbled,
And the impassible chasm became a steppingstone.
All we had to do was extend our hands and bring the stars to us.

For years, we traveled.
We grew.
We expanded.
We settled new planets.
All the while, the opposition raged.
“Earth Only!” they yelled.
“How dare you modify people to travel in space!
“Stop spreading earth’s corruption to other planets!”

A new barrier was put before us.
A new chasm had to be crossed.
A political chasm.
And out of this chasm crawled a relentless horde of radicals
Bent on severing all our ties with other worlds.

Now the yearning has returned.
Our need to explore cannot be denied.
The arrow still points.
The bow is still drawn.
We will release it again.