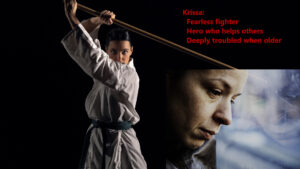 Krissa’s personal struggle with the past is a major theme of Deehabta’s Song. The character of Krissa developed over a long period of time. When I first imagined the book, she was not the main character. And it took the help of a developmental editor to bring out Krissa’s full depth, something I truly appreciate.

I love this character. She is so sincere. Her reaction to use her fighting skills to help others is instantaneous. She doesn’t hesitate. Her tendency to fight before she thinks gives her an advantage in a street fight, but it also gets her into trouble. In her sixties, when she struggles with deep mental issues, her reliance on fighting through her problems by herself doesn’t help her, and her roommate finds her very difficult to live with.

In her prime, Krissa is not someone you would not want to attack. Even from behind. Here is an excerpt from the book about an occurrence when she is 36.

Suddenly, she senses the presence of someone behind her. Her fighting instincts kick in. She has always had a heightened awareness of her surroundings, and now she hears what she knows is a staff slicing through the air behind her. She reacts immediately, spinning in the direction of the staff’s motion and pulling it forcefully out of the hands of her attacker as it approaches her. As she continues her spin, she is now behind the man and delivers an upward blow to his head with her newly obtained staff. She has already spotted a second man holding a staff as the first guy tumbles to the ground. Now, with perfectly fluid motion, she rotates her staff at high velocity to knock the staff out of the hand of the second man and delivers a swinging upward blow to his jaw, which knocks him flat.
She throws the staff to the ground and stands over the two men. They are quite younger than she is, probably teens, with scruffy clothes and long hair. “Who in the pits are you guys?” she demands. Neither of them can answer, as one is unconscious and the other is lying on his back moaning in pain. She presses a button on her comdev to contact emergency services. A dispatcher takes the call.
“What is the nature of your emergency?”
“I was assaulted in the street,” Krissa responds.
“What is the location of the assault?”
“At my current coordinates.”
“Do you need medical attention?”
“No, but my attackers do.”

In spite of her success, one spontaneous act results in difficult circumstances for her. Here is another excerpt from the same time period.

Before she acts, she thinks about the consequences. Challenging the EPF is foolhardy. She knows what could happen to her. However, she is compelled by a drive to fight the injustice done to her and her friends. As she paces back and forth, rage ultimately overcomes reason. Making what could be the worst decision of her life, she spots the EPF vehicle, waves to the agents inside, and charges into the building.
At this provocation, two EPF agents immediately emerge from the vehicle with their weapons drawn and follow her in. The agents hesitate near the entrance and look around to see if they can locate Krissa, but she has positioned herself behind some scaffolding. Before they have a chance to spot her, she jumps in front of them, knocks the weapons out of their hands, and runs directly between them to go outside.
Krissa hears a flurry of curses from the men as she continues running and attempts to disappear in the crowd. When she arrives at Pioneer Plaza, she looks around to see if she is being followed. Surprised that she is not, she stands at the tram stop with her senses on high alert and her fight reactions on a hair trigger. She remains in this heightened state the entire trip home. She is not foolish enough to assume that because the EPF has not tried anything, they are reluctant to come after her. In her apartment, she sits in her chair—EB off—holding her staff. It is not long until she hears the door chime and an angry voice coming through the speaker. “This is General Stasis of the EPF. I’m coming in.”

Krissa’s troubles pile up to the point she begins to lose hope. In the next excerpt, she is in her early sixties. She has hit bottom, emotionally, and is trying to drown her troubles in ale imported from Caderyn. This time she is not able to fend off an attack from behind.

She picks up her latest bottle and sees it is empty. Setting it down, she gets up and walks out of her apartment, uncharacteristically without her staff, and makes her way to a nearby liquor store. There, the proprietor greets his new best customer, who quickly walks to the refrigerated section and pulls out two liter-sized bottles of ale. After she pays the store owner with her dwindling cash account for the semi quarter, he puts the bottles in a bag for her and says, “Have a good night, Krissa.”
“Good night, Magsin,” she replies as she walks out with her bottles.
On her way home, she hears a voice behind her shout, “This is for Mindas!” Inebriated and sluggish, with no staff and exhibiting none of the reflexes she is known for, she is hit on the head from behind and collapses in the gutter.
Krissa does not know for how long she is unconscious, but when she awakens, she sees that a young man has grabbed her bag and appears about to run off with her bottles of ale. At this, her arm automatically extends and her fingers clutch the guy’s throat. Maintaining her iron grip on the terrified youth, she slowly gets up. He is noticeably trembling as she glares at him. Then she releases her hand, and he takes off down the street as if fired out of a hand weapon. Feeling understandably light-headed, she has a little trouble grabbing the bag containing the bottles, which are surprisingly unbroken. She does so, however, and starts walking home, for the first time feeling the blood trickling down her head. Once she arrives in her apartment, she sits in front of the EB and passes out.

I hope you enjoyed these excerpts. Read the book to learn what unfolds after this. It is a thrilling story.