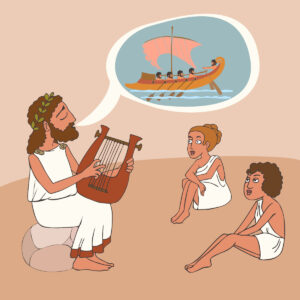 The epic, or epic poem, is an ancient literary form that tells the story of a hero’s mighty deeds. The Iliad and the Odyssey by Homer are familiar epic poems. Estimated to be written in the 8th century BC, the Iliad tells of the Trojan War, which occurred in the 13th or 12th century BC. Ugaritic texts, also from the 13th and 12th centuries, include about 50 epic poems. The Epic of Gilgamesh is a Sumerian epic poem written between 2100 and 1200 BC.

These written texts were probably based on stories that were handed down orally. The Iliad was written possibly 500 years after the event it describes. So, it makes sense that Homer based his work on stories that, at some point in time, had been transmitted orally. My book Deehabta’s Song draws from this oral tradition and even includes references to an epic poem.

The book explores the power of speech, making parallels to Celtic history and mythology. The planet name Caderyn is derived from the Celtic name Cadeyrn, meaning “king of battle.”
Behind the Name

Also, the fierce Onye warriors of Caderyn are loosely based on the Picts, the British tribe that tormented the Roman armies. Whether unique to them or not, the Celtic people saw speaking as a way of wielding power. They deified eloquence in the god Ogmios, who used the power of words to bind people to himself.
Ogmios

Depictions of Ogmios show him with chains coming out of his mouth, and these chains are connected to the ears of people he is pulling with him. I included this imagery in my book, as shown in following excerpt:

Near the end, the video redeems itself somewhat, offering a relatively steady shot of a fascinating building. On the exterior of this building is a bas-relief depiction of a man’s face with chains coming out of his mouth, and the chains are connected to the ears of people looking up at him. “Wow, what is that?” Jo exclaims as she leans in closer to the console screen. Krissa doesn’t answer, and Jo gives her an irritated sideways glance. Krissa has been playing this silly video incessantly for three days straight, yet she does not seem interested enough to share any thoughts about it.

The building described in this excerpt is an Onye theater where an epic poem is recited. The words of this poem elicit an interesting reaction in some listeners. Here is another excerpt from the book:

Ilyani notices that he is reciting a poem, but she does not recognize the language. Yet the words come with a force that she feels deeply. After a while, she is no longer watching the old man but is basking in the sound of his voice with her eyes closed. She is abruptly wrenched out of this meditative state when she hears a scream from a woman in the audience. As Ilyani opens her eyes and looks around, she hears different people emit yells, laughter, or exclamations of some kind.
“Wow, that is awesome!”
“Beautiful!”
The old man simply ignores the reactions in the audience and continues reciting the poem.
Thoroughly bewildered, Ilyani looks at Drey. “What just happened, Drey?”
He gives an unexpected response. “Did you see them?”
“See what?” Ilyani replies.
“The animals.”

In the book, this event occurs at the outset of the Caderyn War. The power of this poem to evoke visions of animals, a power enhanced through song, is later used as a weapon in the war. Deehabta’s Song contains many other allusions to the Celts, including their struggles against the Roman empire. I hope you enjoy the book.