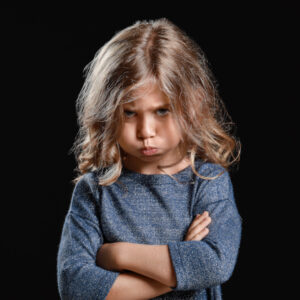 This story is based on the character Ilyani, “the little warrior,” in the book Deehabta’s Song, by Stephen Alder.

“Ilyani! Get up here!” Miram yells.
A young girl turns rapidly in her chair and faces her teacher, plopping her hands on the desk in front of her. “I dint do anything Madam Miram!” A boy sitting next to her is holding his nose as their classmates titter and giggle.
“I saw you hit Tan. Now get up here like I asked you to!”
“But he was teasing me!” Ilyani whines.
“We don’t hit people, Ilyani. I have talked to you about this before. Come up here and stand in the corner until your mother arrives.”
Ilyani gets up and stomps over with such a big pout on her face that Miram tries hard to keep from laughing. After this, Ilyani stands completely still with perfect posture, not moving a muscle, as she faces the wall. Miram knows Ilyani is physically gifted, already a master in several martial arts disciplines at the age of six. That is why she is determined to get Ilyani’s temper under control, before someone really gets hurt.
She turns to address the other children. “Okay, class. We’re almost at the bell. I need you to pass up your writing examples, finished or not.” Next, the room is filled with the sounds of groans and the rustling of paper being handed from one child to another. After they are dismissed, the children rush out of the classroom while Ilyani stands forlornly in the corner.
When Ilyani’s mother arrives, Miram stands up to greet her. “Hi Andaya. How are you today?”
Andaya’s expression is sad and angry at the same time. She looks tired. “Not happy that I have to deal with another hitting incident.”
“I understand,” Miram responds. She turns to Ilyani. “Your mother’s here, Ilyani. You can step away from the wall.”
Ilyani pivots like a graceful dancer. When she sees her mother, she reacts by looking at the floor, her lower lip extended. She is no hurry as she walks over to where Andaya and Miram are standing. Andaya looks at Ilyani and says, sternly, “You’re going to stay in your room tonight.”
“But I have my Onye style dissapin!” Ilyani protests.
“You’re not going tonight, sweetheart.”
“Daddy will let me go!”
“No, he won’t. Your father and I agree. You cannot hit people, IIyani.”
Ilyani starts to cry. “Tan said my hair looks like a pidgee’s nest!”
Andaya crouches down and wipes away strands of hair from Ilyani’s eyes. “Oh sweetheart, you are a beautiful girl with beautiful hair. It doesn’t matter what anybody says. Don’t they teach you in martial arts that fighting is a last resort to defend yourself? You can be angry. But answer with your words, not your fists. Okay?”
“Okay,” Ilyani sniffles.
Just then, Tan’s mother walks into the classroom with her son in tow. “You have to make her stop hitting people,” she says scornfully.
“We’re working on it,” Andaya reacts.
Tan’s mother looks down at her son and says, “Go ahead.”
Tan walks over to Ilyani and mutters, “I’m sorry I made fun of your hair.”
“I’m sorry I hit you,” Ilyani replies.
As the two children give each other a hug, Miram smiles. “Reconciliation is so much easier at that age, isn’t it?”